You are here: Home1 / News and Events2 / Commissions 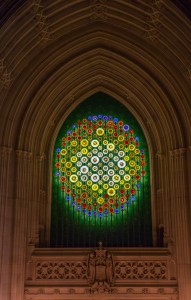 Over the past two years Adam Aaronson and his team have been working together with the installation artist Mary Branson, on an exciting, secret project entitled “New Dawn”.  Mary is Parliament’s ‘artist-in-residence’ for women’s suffrage. Many visitors to Adam’s studio have noticed the buzz of activity but usually all questions about the project were met with deafening silence. Except that Adam did tell a few people that he was developing canapé dishes for a restaurant chain and this seemed to keep them happy!

Now the secret is out and if you missed it on the national news, New Dawn was unveiled on June 7th in Westminster Hall in the Palace of Westminster. This link takes you to the BBC News Report on the day. (Adam appears at 00.42 and 01.36)

This legacy artwork is the brainchild of Mary Branson. Mary was commissioned, as part of her residency, by the Speaker’s Advisory Committee on Works of Art. Her task was to develop a proposal for a site-specific work. The brief was for an artwork to be placed in a permanent location in the Palace of Westminster as part of the Parliamentary Art Collection. Finding a suitable location in such a huge building was challenging. However, Mary kept being drawn back to the entrance to St Stephen’s Hall, where suffragettes petitioning Parliament all those years ago, were barred from entering any further. As part of  her research, Mary discovered that Parliament is full of traditional art and sculpture. However, this mainly features male politicians. Women are hardly represented. So she wanted to redress the balance with a large scale contemporary work honouring the thousands of campaigners who paved the way for universal suffrage. The majority of these were, of course, women. Mary discovered that Charles Barry, in his nineteenth century rebuild of the Palace of Westminster, had originally intended the two alcoves, high above the doorways in Westminster Hall, to house an epic pair of artworks. These were intended to depict “War” and “Peace”, but his budget ran out. So the radiant calm of Mary Branson’s New Dawn turns out to be an ideal alternative for this location as it is sited exactly where Barrie had intended “Peace” to be celebrated.

New Dawn is a dynamic glass, metal, and light sculpture and marks 150 years since the philosopher John Stuart Mill presented to Parliament a petition calling for votes for women. This became a turning point for the women’s suffrage movement. 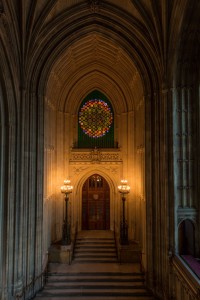 Mary Branson first approached Adam Aaronson in June 2014 when the concept was in its nascent stages and they have been working closely together on the project for almost two years. Mary’s inspiration came from the ends of the scrolls in the Original Act Room in the Victoria Tower in the Palace of Westminster. This is where all the legislation and petitions to parliament in our history are housed. Written on these vellum scrolls is the legislation that brought women the vote as well as the petitions of all the campaigners.

When Mary showed Adam her photographs of the scrolls, he too was similarly inspired and instantly on the same wavelength. So it fell to him to devise a way to reflect the imagery of the scrolls in glass. He achieved this by working with Mary to adapt the carefully honed techniques he is known for, to create the 168 glass scrolls used in New Dawn. 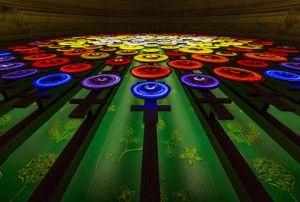 This link takes you to Making the Glasswork , one of three outstanding films that the Parliamentary Curator’s Office commissioned about New Dawn from WakeWood

Over a period of eighteen months, Adam and his team, painstakingly created the glass scrolls for New Dawn. The parameters they had to work to were exacting. More than 350 scrolls were produced to achieve the final result. Many of these had to be destroyed but a limited number of the glass scrolls that didn’t quite make the grade are now available to purchase from the Houses of Parliament Shop.

The hand-blown glass scrolls are of varying sizes and each of these 168 unique glass discs was hand-blown and carefully ‘spun’ to open them out flat. To produce the scroll effect, Adam applied powdered glass colours and silver leaf to the molten glass at specific points in the process. The colours of the glass scrolls were carefully chosen to reflect the coloured banners of the many organisations who spoke up in favour of women’s suffrage. These include the National Union of Women’s Suffrage Societies, the Women’s Social and Political Union, the Women’s Freedom League and the Men’s League for Women’s Suffrage.

To enable Mary Branson to make her vision of New Dawn into a reality, she also enlisted the help of a number of other leading craftsmen.  Ian and Colin Musson, a father and son team, produced the supporting metal work. Mary designed this in the shape of a portcullis. Chris Wilson of WLX Productions produced the lighting programme, which runs on a twelve hour cycle. New Dawn is unusual in that it is a dynamic artwork. Mary spent weeks devising the programme that changes the sculpture over a twelve-hour cycle that is governed by the ebb and flow of the tides of the River Thames. The historical significance of this is that the suffragette movement regarded itself as being on the rising tide of change, and the clock would not be turned back. The journey was still to be a long and tortuous one, but there was no going back and eventually women gained the vote.

You can find out more about New Dawn and the rich historical references that imbue it with an extra dimension, by downloading the brochure here

Mary and Adam have also designed a series of limited edition commemorative, New Dawn Scroll Bowls which can be purchased from the Houses of Parliament shop.

Measuring 6 metres by 4 metres, New Dawn is the largest publicly commissioned glass sculpture of its kind in the UK, to the best of our knowledge. 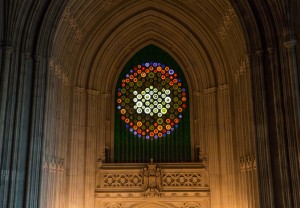 This link takes you to Mary Branson’s website. If you scroll down to the picture of Mary and the image opposite shows the dynamic nature of the work, which is linked to the tides of the River Thames.

Thanks to Emma Brown for the images of New Dawn shown here.

Adam Aaronson Glass Studio was recently approached with a commission to replace some lampshades on a 1960s light fitting. Our clients, who live in one of the charming Surrey villages a few miles to the east of our glassblowing studio in West Horsley, had visited us during one of our events during SAOS – Surrey Artists Open Studios. They particularly liked the style of Adam’s “Fresco” vases and came back to see whether it would be possible for Adam to design some replacement shades in bright colours to reflect that body of work. As usual, Adam rose to the challenge and he was very pleased with the results as were the clients.

A few days after our clients took delivery, they very kindly sent us this image showing how they look, now that they have been attached to the light fitting. We can understand why they were so pleased with the results. We do a great deal of bespoke work on commission at Adam Aaronson Glass Studio, but on most occasions we don’t actually get a chance to see how it turns out, so this image was doubly welcome.

This website uses cookies to improve your experience while you navigate through the website. Out of these cookies, the cookies that are categorized as necessary are stored on your browser as they are essential for the working of basic functionalities of the website. We also use third-party cookies that help us analyze and understand how you use this website. These cookies will be stored in your browser only with your consent. You also have the option to opt-out of these cookies. But opting out of some of these cookies may have an effect on your browsing experience.
Necessary Always Enabled
Necessary cookies are absolutely essential for the website to function properly. This category only includes cookies that ensures basic functionalities and security features of the website. These cookies do not store any personal information.
Non-necessary
Any cookies that may not be particularly necessary for the website to function and is used specifically to collect user personal data via analytics, ads, other embedded contents are termed as non-necessary cookies. It is mandatory to procure user consent prior to running these cookies on your website. Our Site uses Facebook Pixel to provide targeted Facebook advertising for Our Site, Google and ActiveCampaign analytics services, These services will be provided by Facebook, Google, ActiveCampaign respectively, or by other similar providers. Website analytics refers to a set of tools used to collect and analyse anonymous usage information, enabling us to better understand how Our Site is used. This, in turn, enables us to improve Our Site and the services offered through it. These service providers are not permitted to use the information collected on our behalf except to help us conduct and improve our business.
Functional
Functional cookies help to perform certain functionalities like sharing the content of the website on social media platforms, collect feedbacks, and other third-party features.
Performance
Performance cookies are used to understand and analyze the key performance indexes of the website which helps in delivering a better user experience for the visitors.
Analytics
Analytical cookies are used to understand how visitors interact with the website. These cookies help provide information on metrics the number of visitors, bounce rate, traffic source, etc.
Advertisement
Advertisement cookies are used to provide visitors with relevant ads and marketing campaigns. These cookies track visitors across websites and collect information to provide customized ads.
Others
Other uncategorized cookies are those that are being analyzed and have not been classified into a category as yet.
SAVE & ACCEPT
0
0
Your Basket
Your basket is emptyReturn to Shop
Continue Shopping