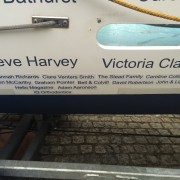 If you’ve been watching the news, you’re probably aware that Callum Gathercole is aiming to break the world record as the youngest solo rower to cross the Atlantic and at the same time to raise an awe-inspiring £280,000 for three charities: Princess Alice Hospice, Brace, funding Research into Alzheimer’s and Brain Tumour Research. Callum and his family live in East Horsley, just a stone’s throw from our glass blowing studio in West Horsley and many of the friends we have made since our move here, including Quaich in East Horsley, are also backing Callum. If the recent weather has been getting you down, spare a thought for Callum who is out in the mid-Atlantic in somewhat worse weather conditions!

At the time of writing Callum and his fund-raising team have passed the £230,000 mark and at Adam Aaronson Glass Studio we are all very proud to have been involved with raising £1,250 towards his target. We achieved this by donating two auction prizes for special themed glassblowing events, which attracted substantial bids at the 2014 and 2015 fund-raising Balls. The first event was a once-in-a-lifetime glassblowing experience to work with Adam to create a special landscape bowl and the second was an exciting Christmas Bauble blowing session for a family group.

We were thrilled to hear that Callum and his team had added Adam’s name to the list of sponsors painted on the side of “Small and Mighty” so we really feel we are crossing the Atlantic with him and are following his progress on the race-tracker page and on Facebook.

We are already planning what to donate as this year’s auction prize for this great cause, so keep an eye on our events page for an update if you would like an opportunity to win it, but in the meantime there’s nothing to stop you popping over to Callum’s Just Giving page and making a donation.